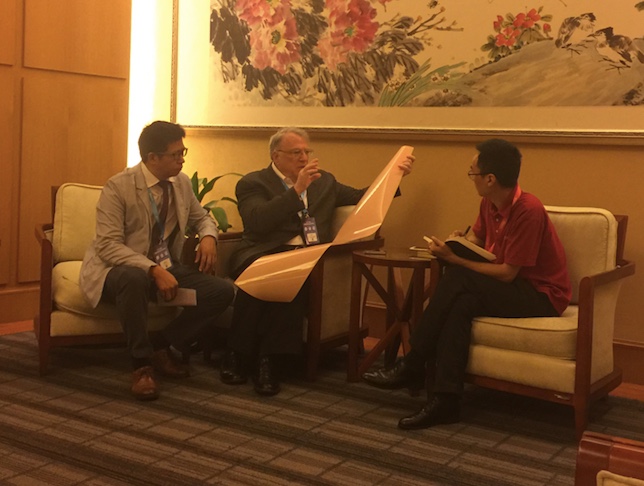 Light Polymers, leading LED lighting and OLED display technology innovator, exhibited at the Zhuhai Advanced Material summit on October 26th and October 27th. Light Polymers presented the most extensive set up at the show, consisting of a table with information displays, samples of the polarizer and LED lighting products, and the chemical components these samples were made with. The Light Polymers table attracted dozens of top Chinese venture capitalists and experts in material science on the first day. The day concluded with a Gala Dinner – yet another opportunity to bring the light of new technology to the uninformed.

The second day was even more stimulating, with the exhibition divided into topic-specific sub-forums. Light Polymers maintained a display table, extending the opportunity for visitors to learn about the technology. Light Polymers’ presentation on the second day was welcomed as one of the best in their subforum dedicated to Macromolecules. The summit organizer, Xincailiao.com, also interviewed Light Polymers’ CEO Marc McConnaughey in an engaging conversation about the future role of the company’s technology in China. The resulting story will be featured in their upcoming press release. 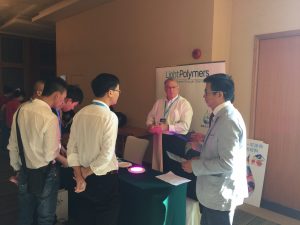 Founded in January 2013, Light Polymers has conducted extensive application research and commercialization on the use of lyotropic liquid crystals in the fields of LED Lighting, LCD and OLED displays. The major focus of Light Polymers’ research is to deliver chemistry for leading edge materials for flexible and foldable OLED displays. Their OLED chemistry is now in trial stages with a number of potential commercialization partners. Light Polymers’ advanced materials can also be used in building industry, in applications such as concrete admixtures and aerogels. Biomedical field can benefit from Light Polymers’ lyotropic liquid crystals being used as binding agents to enable new cost-effective disease diagnostic technology.

Light Polymers’ advanced lyotropic materials also enable the world’s most efficient flexible remote phosphor film. In LED lighting, a remote phosphor film changes the wavelength from blue to white light. Using a remote film moves the ‘conversion process’ phosphor materials. Instead of a phosphor coating on the LED itself, a “remote” phosphor film is located a short distance from a bare blue LED to perform the light conversion. Remote phosphor film technology has many benefits in terms of efficiency improvement, reduced glare, improved reliability as well as better uniformity of brightness and color reproduction. The new solution from Light Polymers offers the improved performance benefits at a much lower cost compared to the current on-LED phosphor solution and includes the ability to deposit phosphors on flexible substrates while competing remote phosphor solutions are limited to rigid substrates. Light Polymers’ LED products can be purchased in Taiwan at www.crystallinlighting.com/tw and will soon be available in the US.